These groups have obtained dozens of databases belonging to the ICCO, which contain valuable information on the regime’s front organizations in other countries, its money laundering activities and its network of spies and terrorists in the stranger.

The Islamic Culture and Communications Organization (ICCO) was established in 1995 with the task of consolidating all export activities of extremism to different countries of the world, especially Muslim countries, in order to promote (the supremacy of clerics). 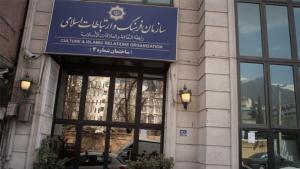 At the beginning of 1996, the Organization of Islamic Culture and Communications began its official work as one of the organizations affiliated to the Office of the Supreme Leader. They carry out their activities abroad with the coordination of the ICCO.

ICCO’s board includes two ministers and the deputy for international relations from Khamenei’s offices, confirming his important role in the regime.

According to reports and videos, at least six sites were stormed and 15 defaced to display photos of Iranian resistance leader Massoud Rajaivi and NCRI President-elect Maryam Rajavi.

According to reports and videos, at least six sites were stormed and 15 others defaced to display the photos of Iranian resistance leader Massoud Rajaivi and NCRI President-elect Maryam Rajavi.

In addition, 44 servers, hundreds of computers and 35 databases belonging to ICCO were erased during the operation.

At least two automation servers have been rendered dysfunctional.

And more importantly, the group obtained dozens of databases belonging to the ICCO, which contain valuable information on the regime’s front organizations in other countries, its money laundering activities and its network of spies and terrorists abroad.

In a separate video, the group demonstrated step-by-step support for ICCO’s hardware firewalls, which gave them broader access to the organization’s internal resources.

This is the latest in a series of offensive moves by the group against the regime:

January 27, 2022, suppression of the state television/radio network and broadcast of the slogans “Death to Khamenei” and “Hail to Rajavi” through 27 state media networks.

March 14, 2022, dismantling and defacement of dozens of platforms associated with the regime’s Ministry of Culture and Islamic Guidance and dissemination of images of Massoud and Maryam Rajavi, and an image of Khamenei defaced with a ” X” red while calling for continued protests and an uprising to overthrow the mullahs’ regime.

April 25, 2022, Removal and degradation of more than 100 servers and computers, dozens of applications and databases, 37 websites and 12 internal platforms associated with the Ministry of Agriculture Jihad during the broadcast of images of Iranian Resistance leaders and the image of Khamenei with a red “X”.

June 2, 2022, Takeover of thousands of servers and security cameras belonging to the Tehran Municipality.

The regime has struggled for weeks to get its systems back online.

What is the Islamic Culture and Communication Organization (ICCO)?

The Islamic Culture and Communications Organization (ICCO) was officially established in 1995 with the task of consolidating all export activities of extremism to different countries of the world, especially Muslim countries, and to promote and propagate the velayat-e faqih (supremacy of the clerics).

This organization is essential for establishing terrorist activities and recruiting fundamentalist and extremist elements.

Although this organization is considered part of the Ministry of Culture and Islamic Guidance, in practice it is a key part of Khamenei’s office.

The constitution of this organization was drafted with the approval of Khamenei and all the members of his supreme council.

The administrators of this organization as well as its leader are appointed by Khamenei.

The supreme council of the ICCO includes two ministers and the deputy for international relations of Khamenei’s offices, which confirms his important role and position in the regime.

Although huge sums are allocated to this organization from the country’s approved budget, it also receives considerable funding through unofficial channels, including huge sums under the control of Khamenei’s office.

Cleric, Mehdi Imanipour is the current boss of ICCO.

In September 1993, Khamenei approved a plan to centralize propaganda centers under a single entity.

At the beginning of 1996, the Organization of Islamic Culture and Communications began its official work as one of the organizations affiliated to the Office of the Supreme Leader.

ICCO’s constitution states, among other things, that “all non-governmental organizations and institutions are required to carry out their overseas cultural promotion activities with the coordination of the organization”.

The fundamentalist bodies of the Ahl-ul Beyt Assembly, the Taqrib and the Council for the Expansion of Farsi Language and Literature retained their mandates when transferred to the Organization of Islamic Culture and Communications .

Article 2 of the statutes defines the aims of the organization as follows:

1. Revival and expansion of Islamic thoughts and knowledge in the world to awaken Muslims and convey the message of true Islam to the world.

2. Make the world aware of the foundations, objectives and positions of the Islamic revolution and explain its position to the peoples of the world.

3. To develop cultural relations with different nations and tribes, especially Muslims and the oppressed all over the world.

4. Provide the basis for unity among Muslims and form a united front based on fundamental Muslim principles.

5. Intellectual confrontation with the anti-religious, anti-Islamic and anti-revolutionary culture and informing Muslims about the divisive plots of enemies and defending the rights of Muslims.

Article 8 of the statutes specifies the financial resources of the organization as follows:

1. Government aid from the accounts of public funds is part of the annual budget of the whole country.

2. Income from cultural and promotional activities of the organization abroad.

3. Donations from natural and legal persons.

5. Other income approved by the supreme council of the organization.

The organization’s budget for this calendar year has not been made public. But the official budget last year (March 2020 to March 2021) was 4,150 billion rials, or about $100 million at the official exchange rate in 2021.

A video released by the Ghiam Sarnegouny group shows the FortiGate hardware firewall server of the Iranian regime’s Islamic Culture and Communication Organization.


EIN Presswire’s priority is source transparency. We don’t allow opaque clients, and our editors try to be careful not to weed out false and misleading content. As a user, if you see something we missed, please bring it to our attention. Your help is welcome. EIN Presswire, Everyone’s Internet News Presswire™, attempts to define some of the boundaries that are reasonable in today’s world. Please see our editorial guidelines for more information.