Since fall 2020, when The Beacon saw more than a dozen staff resignations due to a toxic and race-insensitive newsroom culture, we’ve been working to reflect and re-examine organizational decisions, The conduct and judgment of The Beacon News. One of our initiatives was this audit of content diversity.

Last semester, we conducted a content diversity audit of over a thousand stories and photos published from August 2019 to August 2020, identifying racial disparities between the diversity of our own contributors and that of The Demographics of Emerson’s Students.

Although the completion of this audit took significantly longer than expected, we believe it is important to communicate the audit findings to the Emerson community for the sake of transparency and comparison with future audits.

Below is a breakdown of how we conducted the audit, a summary of our statistical findings, and the limitations we discovered when performing it.

How we ended the audit

The Beacon management team read all articles published between August 28, 2019 and August 31, 2020 and entered their data into the spreadsheet, except for the incident log reports (which are submitted by the Emerson College Police Department, and not by Beacon staff.)

Beacon staff members performing the audit reviewed the stories in their entirety, taking note of factors such as the apparent race and ethnicity of the author of each story, as well as those of sources cited in the story. story. They also sought to find the gender of sources cited in the Beacon stories. In addition, the audit aimed to determine how often people of color were depicted in Beacon photographs. In addition to the quantitative analysis, staff members also had the opportunity to express specific concerns about the content, structure or reportage.

Once all of the stories were reviewed, we analyzed the combined results to present this audit. We are grateful to the countless Beacon staff who have helped us sift through hundreds of stories since we began this process.

Almost 80 percent of verified stories wIt is written by Beacon staff members, as opposed to Correspondents (who are independent contributors not officially hired by Beacon.)

Data derived from the audit shows that there has been a disproportionate amount of non-POC or white writers for The Beacon from 2019-2020 – our contributors were 9.3 percentent whiter than Emerson’s student body. The data also showed a 60% gap between black contributors to The Beacon (1.4%) and the student body (3.6%).

It should be noted that we had a large margin of writers whose race / ethnicity could not be identified with certainty (13.8%), which likely had an impact on the accuracy of our results. The college’s numbers also put international students into a separate demographic, unlike the audit, which could have a similar impact on our findings. 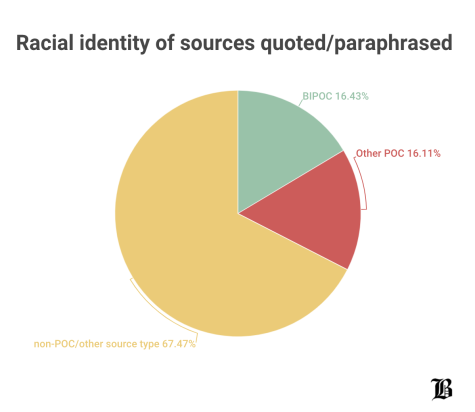 Regarding gender diversity, the audit revealed that 51.0 pOne hundred of the sources cited identified men, while 40.5% were women or did not identify binary. The remaining 8.47 percent were listed as alternative sources.

According to the college factbook (which collects data based on on legal sex), 61.3% of college undergraduates in 2019 were female, and 38.7% were male. Thus, the audit found that The Beacon cited 31.8% more male sources that there was no male maleents.

Examination of the Beacon photos, however, revealed that 43.3% of the photos used in stories featuring people of color while 56.7% of the photos did not show a POC or white individuals –– more accurately reflecting the Emerson community.

We recognize that there is no guaranteed way to find definitive answers to all of the questions included in the audit, which brings us to the limits that are important to note when analyzing the audit findings. 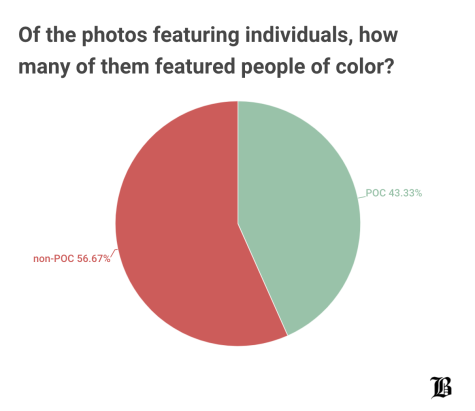 This is the first content audit that The Beacon has completed in almost 75 years since its inception. Our results have many limitations and areas for improvement, which we will take into consideration when planning future content audits with more successful models and results.

One of the most glaring dilemmas we have encountered is the complexity of identifying someone else’s race, ethnicity, or gender. Much of the audit asks questions about the personal identity of the author or source. In many cases, it was easy to identify the race or gender of a source or contributor, especially if staff members already knew the person, but we recognize that this approach is inherently problematic.

In most cases, staff members were able to answer all audit questions with relative confidence. However, we have found that in some cases there is not always a definitive way to determine a person’s race or gender without being able to reach the person directly. These identities are often complex and personal, and cannot always be identified solely on the basis of a photo in a story or social media profile belonging to that person.

For this reason, we have included an option for listeners to mark an individual’s race / ethnicity as “unknown or uncertain” and have asked staff to exercise caution.

The data also have other limitations. We do not include students with disabilities, for example, nor does the college in its official report on the demographics of student disability status.

We recognize that the data reflected in the audit may not be 100 percent accurate in identifying the identity of each author or source. Despite the lack of certainty, we believe this information is too valuable to be ignored.

In the future, we are working to find better ways to phrase these questions that will yield more specific results. We may also seek to analyze other factors, such as gender identity (which this first audit only looked at for sources, not writers) and nationality.

In addition, the time it took to complete the audit is a considerable area for improvement. While we were eager to analyze as much of our content as possible in order to produce a comprehensive report, the inclusion of every story published over the one-year period took months, even with the help of our staff. . Future audits should consider limiting the number of audited stories in order to produce a timely report.

While the results of the audit were disappointing, this process was extremely helpful in assessing where The Beacon is today. The results show many disparities in all aspects of our content creation. Further analysis will help us examine the scale of institutional changes made since fall 2020, when the last verified articles were published.

In addition to functioning as a comparison tool, errors in the process of this audit will help us formulate more informed questions and processes that will accumulate more accurate results.

This first audit was a learning experience for The Beacon, and the disparities highlighted in this audit will help inform our next and the changes we will continue to make in our newsroom. Our next audit will be on our most recent content, starting in fall 2021 and early this spring, and will be released after spring break.