Repeltec, a long-lasting insect repellent surface coating is field tested by the Somali Malaria Control Program for its effectiveness against mosquitoes that may carry malaria and other insect-borne diseases. The field test follows protocols endorsed by the World Health Organization.

Helsinki – February 25, 2022 – In global efforts to control insect-borne diseases, non-profit organizations and governments have turned to residual indoor spraying as one of the tools to control mosquito-borne diseases like malaria, dengue and chikungunya. The approach leaves a thin layer of pesticides on walls inside residential spaces. The big downside to traditional residual indoor sprays is that they are classified as hazardous. Repeltec, a new coating developed by AFFIX Labs, a Finnish tech start-up, aims to be the safest indoor residual spray on the market to repel insects.

Repeltec’s coating creates a clear coat that adheres to a surface and uses a controlled release of a space repellent that keeps insects away from a treated space. Additionally, the coating temporarily interferes with the insects’ ability to sense and bite people, thereby breaking the infection cycle.

The active ingredient used by AFFIX Labs is commonly found in skin lotions and has the lowest toxicity ratings according to the World Health Organization (WHO) classification. Once released, the active ingredient is biodegradable, minimizing long-term risks to the local environment. The environmentally friendly solution keeps insects away from treated spaces without killing them, which means it avoids negatively affecting ecosystems, including bee colonies. 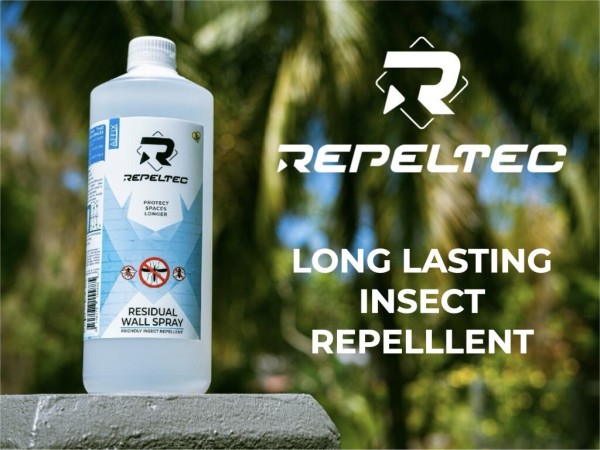 After laboratory studies in Germany, France and South Africa, Repeltec is now undergoing field trials run by the Somali government’s malaria control program, fighting the disease without harming the environment.

Field trials for this potentially revolutionary coating, designed and supported by WHO and the Somali government’s malaria control program, are currently underway to prove Repeltec’s effectiveness under real-world conditions. 20 locations have been treated and are being actively monitored for mosquito numbers, species detected and feeding behavior. The purpose of these trials is to show that Repeltec can replace traditional solutions.

“We’re seeing promising results and getting great feedback from the community. Where people have been reluctant to allow the spraying of pesticides in their homes, a friendlier solution like Repeltec is the future of a sustainable fight against malaria. Says Dr. Abdikarim Husein Hassan, head of Somalia’s malaria program in Puntland.

According to the WHO: “Somalia is heavily affected by malaria and between 2000 and 2019 an estimated 759,000 cases and 1,942 deaths from malaria occurred. Various control efforts undertaken by the Government with the support of WHO and the United Nations Children’s Fund (UNICEF) and financed by the Global Fund have reduced the incidence to 2.6 cases per 1000 inhabitants. in 2014 to 1.8 per 1000 population in 2020, showing a reduction of 25%.” These results show the effectiveness of the malaria control program itself.

After successful trials, AFFIX Labs is ready to deploy Repeltec coatings for nonprofit organizations and business partners in Somalia and other regions replacing toxic residue spray programs with the more user-friendly Repeltec solution.

“We started the company with the aim of replacing toxic products with solutions for the future. These field trials are the result of years of hard work and we are grateful for the support provided by the Somali Ministry of Health and the Somali Malaria Control Program,” said AFFIX Labs CEO Tom Sam. .

AFFIX Labs is a Finnish chemical start-up specializing in coatings with the aim of fighting communicable diseases without compromising people or the environment. AFFIX Labs is funded by a group of environmentally focused Finnish angel investors and has received grants from the European Institute of Innovation (RAW Materials) and the European Commission. AFFIX Labs has also launched antiviral and microbial coating solutions under the Si-Quat and Clean N Coat brands.