Today, Intel announced the creation of its brand new Graphics Research Organization led by Accelerated Computing Systems and Graphics Group Vice President Anton Kaplanyan. The main objective of the organization? Develop the hardware, algorithms and systems that will drive the next generation of computer visuals.

Press release: I’ve spent my career at the cutting edge of graphics technology, with the added good fortune of having experienced a wide range of them – from game engines and movie rendering to hardware and middleware to headsets AR and VR. I had a lot of work because everyone, including me, wants more immersive visual experiences. It’s a basic fact: we are visual creatures first and “eye candy” is never satisfied.

We are entering a new graphic era, and it will not come in the form of any device. You might want an immersive display in your living room, in your car, in your hands, or on your head. Regardless of preference, delivering a consistent, high-quality viewing experience across devices is a challenge that needs to be addressed. It’s what motivates me to do my job and it’s one of the reasons I chose to join Intel. 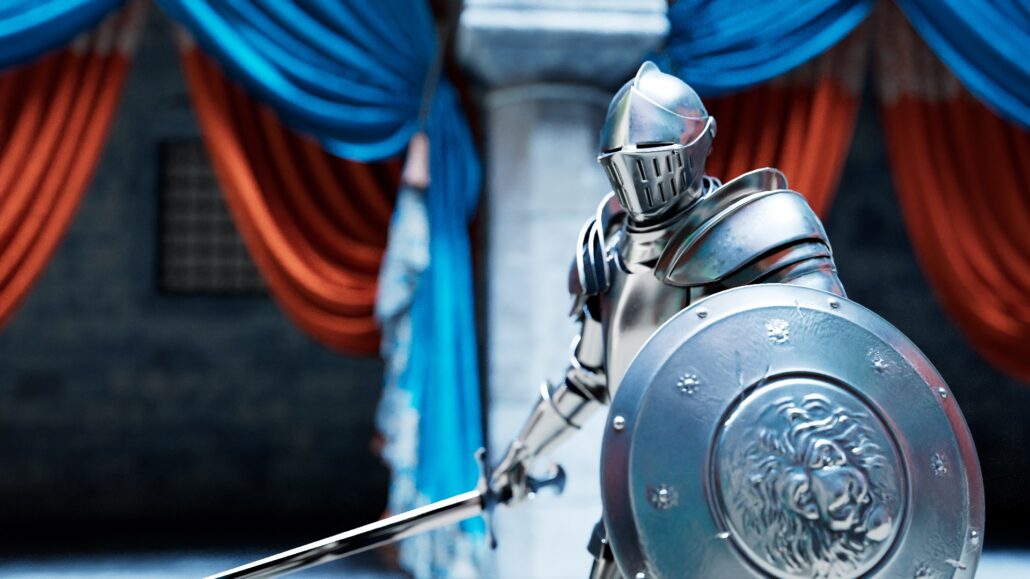 This package includes the fully rigged knight character and includes sample animations. Intel has made a new Sponza scene available as a free download for graphics researchers and academics. (Credit: Intel Corporation)

The ultimate prize is not just richer games, but also future immersive experiences that realize the metaverse vision that Raja Koduri outlined last December and include remote work and presence, photorealistic simulation, and 3D virtual environments. “photographed” by the user. To achieve this, we need visual computing to become more ubiquitous, more efficient, more accessible and smarter.

Our goal is to build the best graphics solutions possible, but we also want to advance in the whole field, the whole ecosystem. And we can only do that by being open, collaborative and forward-looking.

To work on this, I lead and implemented a new graphics research function within the Accelerated Computing Systems and Graphics (AXG) group. My team’s mission is to make that future a reality by advancing the algorithms, systems, and hardware behind the graphics. Ultimately, our goal is to deliver the best immersive visuals to everyone on the planet – to all market segments, use cases, and experiences that require such visuals – think immersive entertainment and gaming, future virtual social interactions, to democratized content creation and realistic visual effects.

As a testament to our open and collaborative approach, the team has made a new Sponza scene available to the research community for free download. This is a modern take on the iconic sample I released in 2010 when I was at Crytek. It has become a default scene in games, visualization, film, and other areas of research and development – published and referenced in thousands of academic and research papers.

After more than a decade, the Sponza scene was overdue for an update. The new scene incorporates physical materials with 4K textures and high resolution geometry, photogrammetrically matched to the real Sponza Atrium in Dubrovnik, Croatia. We have built it as standardized as possible and it is offered in several modern formats, with the aim in particular of making graphical research more reproducible.

The new Intel-remade Sponza scene incorporates 4K textures and high-resolution geometry, photogrammetrically derived from the real Sponza Atrium. The rendered image is on the left; the photo is on the right. Intel has made a new Sponza scene available as a free download for graphics researchers and academics. (Credit: Intel Corporation)

Reproducibility is a common struggle in graphic research. With the new Sponza, as a researcher, if you publish a new method, you can render using the professional camera setup and let the world compare your results to the reference images to literally see the differences and the difference. impact of your research.

And depending on the type of graphics research being done – level of detail or light transport, shading or materials, for example – we’ve provided a collection of additional package options to the basic Sponza scene with advanced lighting, geometry, or materials so researchers can choose one or more packages.

The new Sponza scene and additional package options reflect some of the near-term challenges that our research team is looking to address and resolve. But there are several major paradigm shifts happening in graphics that our team thinks about on a daily basis. 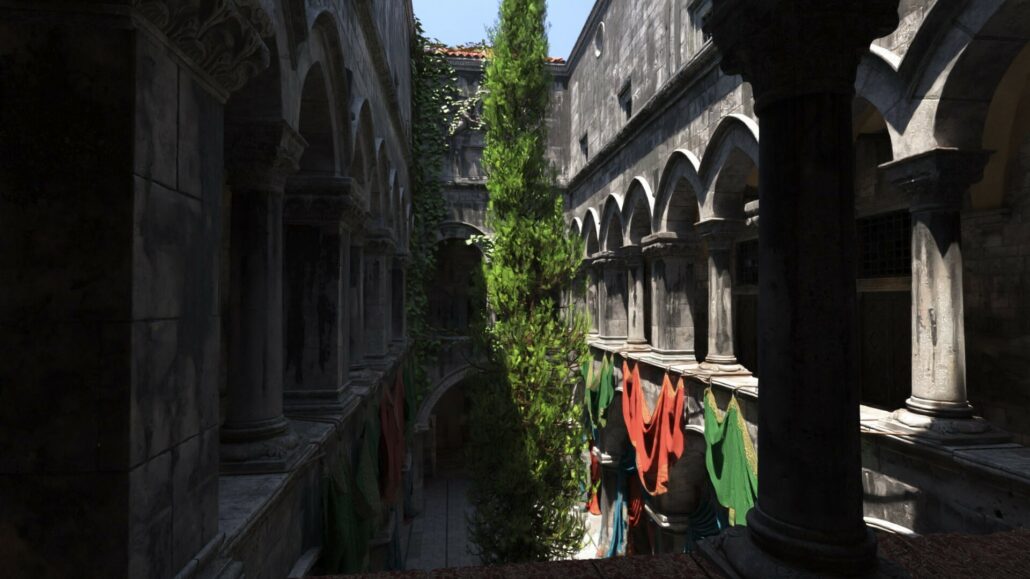 Italian Cypress is created using geometry maps with alpha maps, which is common in game production. Colorful curtains break up the stone texture and add plump colors and shadows to hallways. Intel has made a new Sponza scene available as a free download for graphics researchers and academics. (Credit: Intel Corporation)

First of all, the days of simple scenes and illumination are over. Currently, the film’s visuals are elevated to a whole new level of photorealism thanks to physically correct materials and light transport simulation, often referred to as path tracing. Path tracing is becoming our daily life, not just in offline movie rendering. Games transitioned to physical materials over a decade ago. Due to advancements in ray tracing performance, we are also seeing a move towards real-time path tracing in games. While the visual impact of path tracing is clearly demonstrated in film, many challenges remain to make it practical in real-time graphics and games.

Second, a lot of the things we do in graphs are smart approximations. Machine learning has recently proven to be an excellent approximation tool for complex problems. In time, machine learning will also revolutionize graphics. The entire workflow, from creation to consumption of the visuals, can be deeply reworked using machine learning tools. We’re on point, and our work on Xand Super Sampling (XandSS) technology is just the beginning. 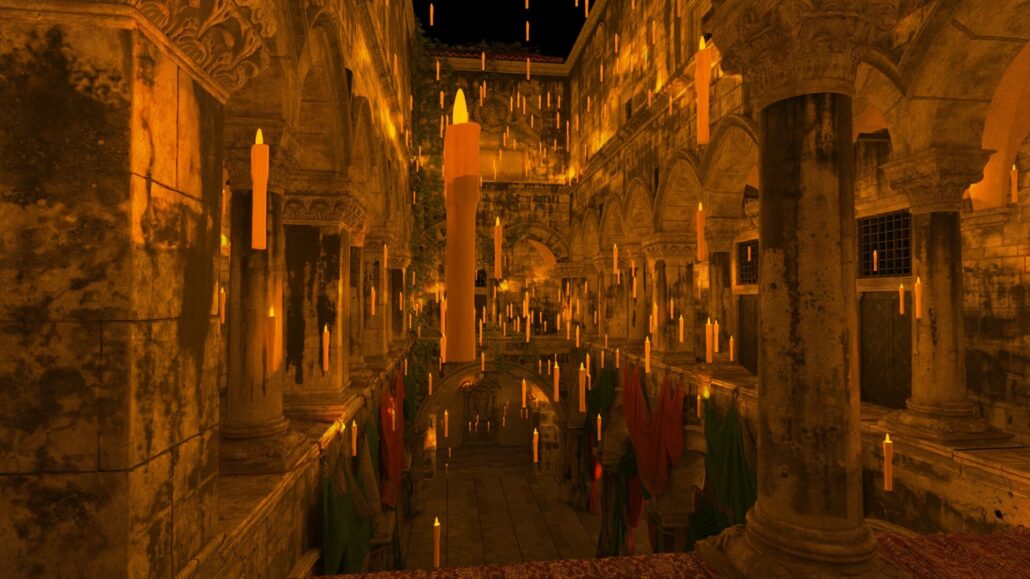 Hundreds of candles are scattered throughout this scene as examples of emissive flames and point lights. Intel has made a new Sponza scene available as a free download for graphics researchers and academics. (Credit: Intel Corporation)

Third, we are seeing a boom in user-generated content, especially in video. Now imagine that next three-dimensional boom — and making that content just as easy to produce, distribute, and consume everywhere, that’s always immersive and high-quality, and done in real time.

The graphics field is changing rapidly and evolving it to meet future demands will be a breathtaking journey. That’s why I’m so excited about visual computing. My team is investigating all the breakthrough technologies needed to advance that future. Today and in the future, graphics become surprisingly more important.